"Matthew Couper: Horror Vacui" Is A Kiss Before The Bite. An essay by Ed Fuentes 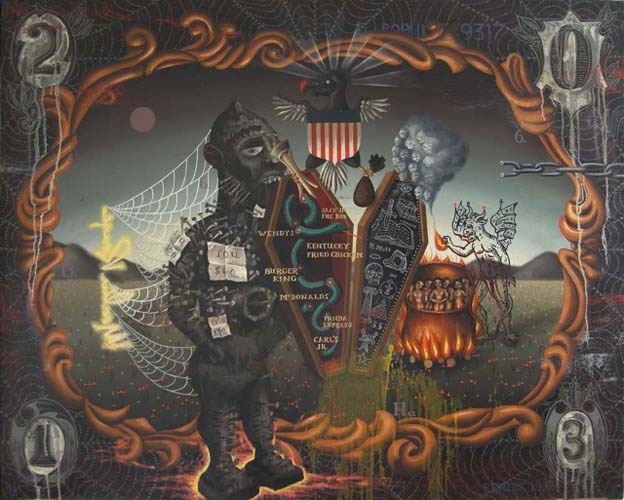 With paintings, video and installation by Matthew Couper, “Horror Vacui” is a gothic frolic through the darkness of juxtapositions. Couper drags the ideals of spectacle and simulacra indoors to show how Vegas imploding casinos to make room for another casino makes the city a vampire. They are landmarks destroyed “only to be raised again on the same ground. Undead, blood-sucking, nocturnal beings rise each night from their coffins," reasons the artist.

In split screen footage, Nosferatu makes his entrance while the Sands topples in the dust cloud of its own remains, and become ghosts.

“Horror Vacui” is also about the false fronts of the Strip when a a painting doesn’t hide it’s utility. The wooden frames holding up detailed pop folk art of cultural figures as social ephemera converts the painting into an installation, suggesting The Strip isn’t urban infrastructure. It too is a set of temporary installations.

On another wall, a point-of-purchase stand peddles t-shirts and caps that converts names of celebrity artists into the typographic branding of dead casinos. That may seem like supplemental to paintings like “'Vampire Weekend,” but the exhibition title are like the worlds on the Strip; a truth that you are expected to believe in. “Horror Vacui” is more about Las Vegas reality of being a constant re-animating body, and less about the visual culture of the undead.

And it’s affectionate satire worthy of a seductive vampire who kisses before the bite and blood let. Couper’s from New Zealand and moved to Las Vegas in 2010 with no shame in the decision. Still, one wonders what others from his homeland think of his new home. It seems we are in an American City with enough courage to be it’s big ole’ bad and gaudy self.

“I think it had to do with the beauty and clichés of Vegas, and that what a lot of people outside of America see,” he said in his crisp dialect. “And it’s smart American culture; taking all the places on The Grand Tour and sticking in one place for convenience.”

The Grand Tour was the post-Oxbridge journey, an academic after-party safari, through France and Italy  taken by young elite Englishmen seeking Western civilization’s art and culture in the sixteenth century and seventeenth century.

“From inside America, Las Vegas does tends to be the cultural whipping boy because it populist by nature,” said Couper. “But that’s how it operates and how it’s successful, with the lights and with the people who have been here -- like Elvis. It’s such a glorious statement.”