The Dealers Hand: traditions of representation in drawings by Lorene Taurerewa. An essay by Warwick McLeod 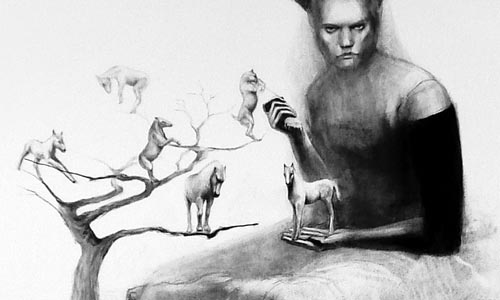 Wit is one of the human race’s saving graces, one of the few human things that is totally positive. It is sharpness of mind with largeness of heart, comedy in the understanding of tragedy. Wit lifts us out of the limitations of the fearful, little point of view.

Wit is the main actor at work in Lorene Taurerewa’s recent large charcoal drawings. The titles of her shows – Eccentricks, More Eccentrickery, Sleight of Hand, The Company of Fools – let us know there is more happening than what we see; and elements within the pictures nod to us, asking us to bring what we know of our world beyond the obvious.

It’s a narrative device familiar from theatre. Just as conspiratorial relationships between playwright and audience function across the border of the stage, despite the actors as well as through them, so with these drawings are such contracts negotiated between paper and viewer. Central to this negotiation is the relationship we agree upon between fiction and truth: because getting to truths is not the same as showing the obvious, we are asked to agree that, when the truth is veiled, we will need devious feints and fictions to get to it. Such a contract, however, opens our vulnerablity; because it assents to any potential turning of the tables whereby viewer may on a turn become viewed; judged rather than judge.

In trying to separate the creases in the way these dramas are folded, we should first define two basic traditions of representation. The first is an ancient staple, but an oddity in the modern age, which has named it Surrealism. This modern genre has its roots in the ancient tradition of allegorical representation. Paintings by Renée Magritte or Salvador Dali are illustrations of the subconscious mind; whose doors had been re-opened by Sigmund Freud and Karl Jung in their studies into psychoanalysis in the early 20th century. In their writing, the subconscious was a world wherein we cage everything we inhibit from exploration in our lives, a ‘fantastical’ or ‘surreal’ world of alienated, dissociated, fractured meanings, beyond logical interpretation. The modern viewer will read paintings by Hieronymus Bosch with the same preconception, as fantastic visions of a disturbed mind. But to the audience of Bosch’s day his paintings were completely legible depictions of a very familiar world; their intricacy was necessary to illustrate the intricacy of interrelationship of the physical, mental, moral and spiritual dimensions of that world. The Medieval and Renaissance audience knew their universe as a kaleidoscopic, symmetric, perfectly harmonious, extremely complex unity; one which only the human being’s shrouded perception could limit to incompleteness, imbalance, unfairness and irony. The art of this culture was always an attempt to lift that shroud to reveal the universal concept.

In this it took part in a still more ancient and global tradition. All pictorial representation used to be tasked with explaining to the public truths much wider and more universal than those of the here and now: truths of such a scale either great or small as to be invisible on the human plane. For images of that universal plane you had to use recognisable figures. The human being, because both infinitely complex and intimately known, was the one most versatile for this job. The animal world, too, enacted roles which in their diversity and symbiosis could be readily imagined to illustrate an overarching, universal interrelationship. Thus, on the wall of the burial chamber in the Great Pyramid, a dung-beetle pushes the sun out of a woman’s vagina and onto a barge, to be hauled by a human team, directed by characters with human bodies and animals’ heads, across the Nile: to represent the sunrise and the death and rebirth of the king and the unity of human life with the whole animal world and the greater universal law. In the Renaissance we find alchemical illustrations showing a man and woman in various stages of sexual intercourse in the bottom of a test tube. It was no problem to the Renaissance viewer to see this as a representation of the stages of chemical process in the alloy of metals. A century later, Rubens portrayed the Queen of France (Marie de Medici) receiving her education from Apollo, Minerva and Mercury. For contemporary viewers, this represented no actual scene but an allegory of the French Queen’s competence in the arts, in government, and in diplomacy. The translation between human image and universal abstract representative was natural and effortless.

In the brief centuries since Rubens painted that picture, the discoveries of science unveiled causes for the world’s phenomena utterly different than had been imagined through the preceding millennia; and accordingly, as belief in the ultimate truths of the past cracked, so did belief in the allegorical tradition’s ability to represent truth. The role of representation changed. A thing could be trusted now to have just one, unique, individual appearance in the actual world, and could represent nothing else. This was Realism, the second of the two traditions Taurerewa utilises in balancing her dramas.

Realism has always allied itself with humanism’s belief in the exceptional quality of the individual, as opposed to the representative quality of the human. It is strong in Hellenist and Roman art, and then again in the Renaissance. It became supreme in the 19th and 20th centuries. While its task – to represent faithfully individuals in individual time – is a job of ennoblement, to us it conveys a cold and lonely quality because we have to read it among the ruins of our forefathers’ beliefs. By the end of the 19th century, we were post-Darwin, post-Nietzsche. God had died and a monkey replaced him as man’s father and creator. With the crashing in of reality, the assumption of an intimate bond between God’s creation and the human being, as its finest, most eloquent expression, collapsed completely; its wreckage lying around us, in temples and paintings, in evidence of a great betrayal. The 20th century’s heritage of loneliness, the condition of Existence in an empty cosmos, is a feeling Lorene Taurerewa’s drawings are well familiar with: they are steeped in the feeling of alienation from meaning in our larger universe. Lying around within the drawings we find vestiges of symbolic connection to the wider and deeper universe, not exactly as ruins of belief but more like neglected toys. Children pick them up trying to remember what the special quality of that toy was, how it connected with special feelings of ancestry and empathy, to relationships deeper, bigger and longer-lasting than one’s self.

Realism’s ultimate weapon was photography – alongside its undeniable testimony to the actual facts, the allegorical tradition was exposed as effete, groundless, only achievable in the collusiveness of painting. In the first photography, the Victorian photo portrait, you still see the ruins of the allegorical imagination, lying around as costumes, props, and backdrops in the studio where photographers, as portraitists before them had done for centuries, would pose and clad their sitters to try to allude to an Apollo or Diana or Venus or Mars, in an effort that today looks vainglorious; as, for all the effort, must have been the feeling then, caught in awkward and vulnerable stares down the camera's lens. Such a hopeless nostalgia would soon be relinquished altogether, as the world turned toward the 20th century and the modern, but for a few decades there the photo's reality was proof of initiation into the new middle class: it stripped away everything you had been, all you were trying to leave behind. If the cardboard props were a little obvious, that was ok; since entrance into this new class brought the right to become your wish, in new lands across wide seas where you would make your hopes and dreams come true. But dreams will go down paths you can't control or foresee.

If a single time and place had to be determined the scene of Ms Taurerewa’s drawings, the evidence would draw us to such a photography studio of the mid-19th century, the shaky imminent time of steamships and cameras, of quick escape to who you might be, of eternal capture as who you are. The still gaze of their characters is not, though, the Victorians' determination to become something else, but the shell-shocked stare of their children and great-grandchildren: the jetsam of the 19th and 20th centuries, the debris of internal emotion, hope, tie, loss and regret, tossed in the mix of incomprehensible shocks that propelled us on our epic and pitiful quests, the sundering path that proved to be only the unending circle of refuge. Along the path they have collected the costumes of the colonial centuries; the colonization of society, and of class, and of culture, and of race and of mind. On this path they have learned that leading and following are the same; bullying and humiliation, manipulation and empowerment, cruelty and caring are the same act. Their sexual identities and power constructs have formed through untraceable moves on the board-game, from a chase of personal fears and silent instincts, choreographed by the unseen hand of the past. They have re-assembled here like aged children ultimately drawn back to the scene of their parents’ murder. From the intervening years they return forged as a circus-troupe of world-damaged fakers and posers, refugees without refuge, without option but to team up with other orphan misfits to form a family; taking up their assigned roles, living by their wits, making the best of the hand they are dealt; carefully, fondly ironing knife-creases into the layers of irony that dumped them into this world; they bear up, present for the camera, and play the role to the full.

Ms Taurerewa shifts scales and frames the way Shakespeare would set a play within a play, to structure different layers of fiction, and thereby invert the relationships of cause and effect. Are the small people controlled by the big people? Do they represent the big peoples’ thoughts; in which case do they control the big people? When the big people come out onto the stage – get up on the table – are they puppets or puppeteers? The viewer is invited to separate the layers of feint and fiction and trace the path of cause and effect, to find the weapon and discover the scene, designate the victim and the perpetrator. But these are not layers to be separated: rather roots hopelessly knotted; tangled from trying to grow in the inhospitable soil of our era, or perhaps of our human nature.

Physically, and therefore sensually, we are put together as tubes of skin with holes; and so defining where we begin and end, where inside becomes outside, is as arbitrary as the placement of a mark upon paper. As our skin which, Möbius-like, loops and re-enters itself, paper both contains no space and intimates the presence of spaces when its sensitivity is called to respond to marks. The connection between sensation-motivated mark on paper and sensation-imprinted mark within ourselves is heartfelt, direct and undeniable. This is the final level of fiction, one where viewer can no longer place him or herself independent of the artifice; and so in the end the very direction of the pursuit is in question. The crime is undeniable, the wound is open, the cruelty is bare; but if we are to move on and away, the case must stay cold.