Huggermugger: monkeys and golliwogs in Lorene Taurerewa's art. An essay by Beth Fiore 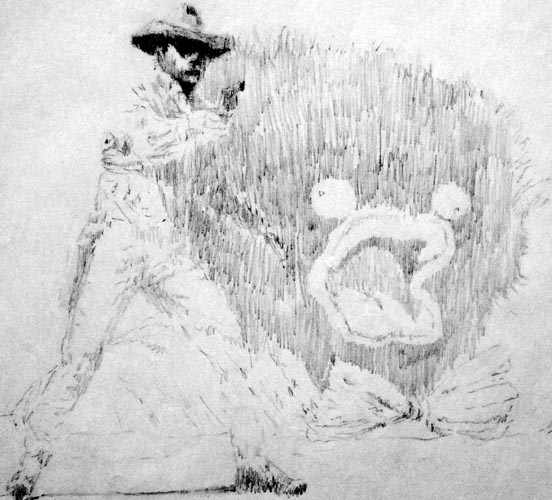 Ms. Taurerewa is widely known in the southern hemisphere as a tenacious force in the discipline of drawing – a skill set that is scant amongst artists today. Beginning over a decade ago, in frustration at conceptualism’s abandonment, through its abundant variety of approaches to draftsmanship, of true principals of light, volume, proportion, and geometry; she took it upon herself to deconstruct and reassemble a methodology for drawing.
Mastering this medium, she has used drawing to create a universe of characters she composes into her own unique figurative allegories. Her stories are centered on dualities of God and Evolution, the eternal versus the ever-changing, Love and Free Will versus Determinism, and the conscious versus the subconscious. She manifests these dialectical investigations in figures in ink and watercolors that are beautiful, delicate; spontaneous in some, deeply still and yet bleeding with potential energy in others: much like the figures in the work of painter Francis Bacon. Her deft hand and years of training have rewarded her with an immediacy of touch that can oscillate between the dualities in the spectrum of psychology, and transmit them in degrees by the motion of her will, her desire, her whimsy.

A new figure has cropped up in Taurerewa’s world; the Golliwog, the huggermugger. This cheeky little being is the embodiment of creative, disruptive wit; a beaming embrace and a martyr for laughter. Like the Pans, Lokis or Mauis of mythology, he is one who lays himself down – literally and figuratively in these works – to give room for Truth.

This character is independent, yet simultaneously one facet in the make-up of our whole self; an allegorical character, like all in Taurerewa’s work. In the same manner, another central theme is enacted in the character of The Monkey. The monkey is the symbol of humanity’s largest question: what are we? When God’s image has been replaced by one of evolution, when the purpose of life has been turned on its head? Within the context of this new Golliwog figure and the older cast of characters, one image of the monkey provides the perfect balance to the show; it is to the soul of the show the over-soul: placing the new in the context of its origin.

Taurerewa’s tight, austere compositions leave large amounts of negative space, which invite invasion by our own reflections; and in that space we hear our own thoughts making deals of untruth. The space provides a stage for the tactician of today’s society, of today’s art world: in the face of the realities that confront art and society, saying little; instead focusing its ambition upon some sort of tautology – where double-negatives are cleverly placed to meaninglessly efface each other, amid the plethora of categories that populate the exhibition, discussion, criticism, and institutionalization of art: where Pluralism becomes an oppressive force against the true nature of experimentation and freedom of speech, because conviction for any one truth must bring critique upon others. Through her characters suspended in space as realities in the landscape of the post-modern world, we are journeying on a highway east of Eden, indifferent to the Steinbeckian nature that envelops us. Could it be our destination is just a mirage, conjured by pacifist Utopian will, actually harboring all the evils that Taurerewa would have us challenge?