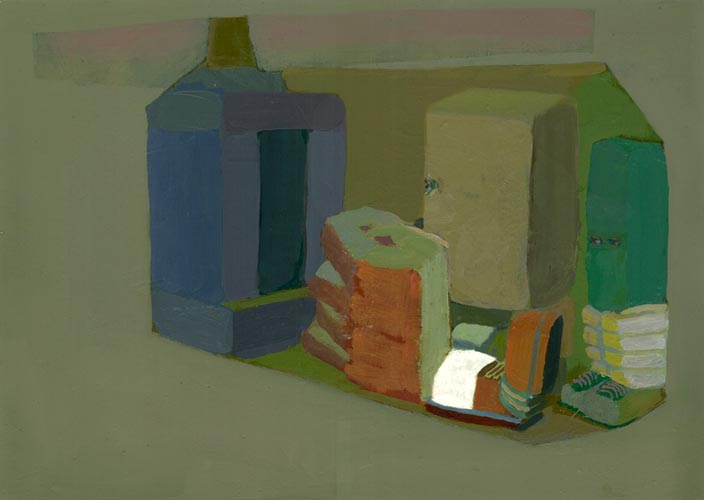 The paintings in Warwick McLeod’s show Old and Young Pretender are either water-based media or oil on paper and canvas. It can be difficult to tell one medium from another. When one thinks of a watercolor, one thinks of a watery, translucent, and luminous effect, not the flat and opaque colors throughout these paintings. Paint is not allowed to drift or wander accidentally, instead, McLeod controls the color by different applications of carefully placed watercolor, gouache, and tempera brush strokes, so the effect achieved is the way he paints in oils.

In many of the paintings, land and sky are one. There are no horizons, no foreground or background. The painting pares down to impenetrable space, a wall of grayed-out greens, yellows, and blues. They are visual landscapes of a sort. Often a house suggests itself, in its original form, or through the shape of one or more of the characters, which populate his paintings. However, the traditional principles of landscape composition are forgotten; to become a memory of an event - a psychological scene, filled as a child’s coloring book by brightly-colored human forms, prompting viewers to read the story.

There is more than a hint of a narrative in McLeod's paintings. He is not afraid to explore the territories of the "story picture,"  and it's many opportunities to articulate his 'own' stories. These are personal histories tied to his ideas of identity, family, and home, often a look at generations; relationships from the present and the past. We can see this in First and Last; a scene played out in a back yard. A small boy on a bike pedals determinedly away, while an old man tenderly holds a younger man; they are without legs, held up and supported by a wooden crutch. What could this painting mean, it's difficult to know, but the essence of a narrative conveys meaning and truth, feeling and emotion. In this case, it is a powerful and symbolic image that speaks to and reminds us of the complexities of our lives.

An allegory is an image that has a hidden meaning: its associations offer clues, so the viewer is inevitably involved in the process of discovery and interpretation. It is a clever ruse which McLeod uses to encourage participation in his narratives. McLeod's stories may derive from personal experience, but in allegories, all experiences are patterns and are representative for larger, more universal situations. We see this in In Attendance, where a man made of stones mimics the menhir-like stone fireplace (menhirs are Neolithic standing stones arranged to make grave-houses). In many of these paintings, there is another character, watching the menhir-pose man, who in turn watches a fireplace. It is evidently a father-and-son relationship: the old and young pretender. The Young Pretender’s role is to try to complete the unachieved dream of the Old; a dream that has receded out of reach.

An extensive repertoire of characters re-appears throughout his work. These characters never look comfortable, often squeezed into each other, their exaggerated hands and feet twisted into strange, fretful, and agitated contortions; clasping and grasping one another, or at something that's not there. Tragedy and comedy abound in equal measure.

A child's brush is at play here. The figures in his paintings are brightly painted cartoons - caricatures of the roles people are forced to play by genes and circumstances - they are without torsos; are just hands, feet, and a head. With hands, they try to signal and grasp; with feet, to contact the ground; the head is for thinking: the eyes, which in many of his figures have a very human stare, register feeling. They are little beings, trying to become an idea. McLeod even mimics the way a child paints those things that are important to him, a house, a yard, and family, to preserve them and sanctify them. Like cartoons, they show an ability to extract the hardships of everyday life while maintaining an air of child-like wonder for the world around them.