Caviar Wishes and Champagne Dreams. A review by Warwick McLeod 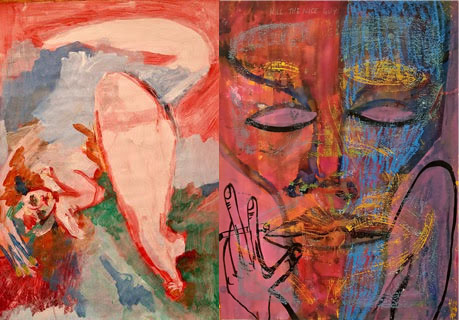 Caviar Wishes and Champagne Dreams is a show of recent paintings by Jay Miriam and Ryan Schneider, curated by Mason Saltarrelli at Room Artspace NYC in Greenpoint.

Jay Miriam’s are all figure paintings and figure drawings; made not from observation, but from body-memory, to try to find a feeling or physical sensation through a certain weight of line or in shoving the direction of a brushstroke. Trailing out a line on its path, she wrists the brush around, by turns flattening and rounding the profile, by the same act pushing and pulling the viewer’s eye into different relationships with the person in the picture. In each of them this line-person forms herself in floating towards you, like a figure bobbing towards the shore, withdrawing languidly on the ebb of a changed mood, to return propelled again on the tide of another thought, to show the viewer a different version of the person’s identity. Moving from painting to painting, at times stopping to watch the play within a single painting, is a beach-wanderer’s vigil in the late afternoon sun, watching that line catch the wave, tumble and glide, and then canoodle around in the estuaries and the rockpools of the rectangle, trying to free itself from the constraints of that rectangle’s rules.

For Ryan Schneider the world is a heavier, harder place: his hand criss-crosses its way from one edge of the rectangle to another like a chain-gang shackled to a railroad track, dragging its line until it snaps taught, hauled back to the beaten path, trudging by the stride of its shadow, knowing freedom can only ever be in the escape of a private mind’s joy in a glance at the sky. That sunburst scorches a skulls-frame into each of these paintings, wherein the mind-track traces and studies anew the rights of man; and finds there just one, the right to imagine, and consider yourself worth, a different fate. There is something in this understanding of the rules of the earthbound that evokes Native American painting traditions; and in rebellion from them, the ongoing tradition of the restlessness of the West.

Every art school rehearses this tradition, and every painting student forms a link. In their symmetric design Ryan Schneider’s paintings owe much to decisions about composition and line you could trace through Clemente, through the more formal German expressionists like Kirchner and Marc, then Picasso and Matisse. Jay Miriam’s gestural brushstrokes trace their line of descent through Baselitz and De Kooning, again to Matisse and Picasso, who discovered so much about the engineering of the rectangle. But it’s pointless to trace the tradition unless we can also say, what does it stand for? That particular tradition of the spatial questioning of the rectangle, which one could call the Western tradition, is something that grows out of Romanesque relief sculpture and Gothic painting: it must have formed itself in long gestation with that great contemplation of the European Middle Ages, on the nature of the freedom of human will. In time that would become the Renaissance and Reformation, the Enlightenment, and the launch of the American Experiment. If it is true that nations, like people, have destinies, then America’s is to discover the answer to that question. To be an American artist is to play your part in this discovery. That is a brave exciting calling, and this urgent time ought to set fire to any artist’s quest.

Painting is an organization of the mechanisms of decision-making that go to make a painting. These mechanisms embody and perform certain dichotomies of being human: being a sentient cognizant animal moving in the world, independent of it, dependent on it, with a role to play in its dependence on you, and with a responsibility to find out that role. That is why we value Painting as a precisely accurate, honest, documenter of our lives and our condition. Picasso was an analyst of this organization, which we can call technique.

To learn about the visual world you need to develop your skills of observation to a high degree. In art school it has long been considered a good idea to ally the practicing of observational skills with practicing the skills of record – drawing and painting. And drawing something is certainly an immediate test of observing it. But the trouble is, this alliance quickly becomes so addictive that many an artist spends the rest of his or her career basically practicing the facility of life painting or life drawing. How to unwed yourself from observation is one of the most tricky practical problems for every practitioner of the visual arts: unless they get through it, the motivational vision that prompts an artist to want to put a new version out into the world – the ‘why’ – will get sidetracked and subsumed into the ‘how’, the immediate problem of translating observation into record. And the problem is incredibly difficult. We have to liberate those elements by which we build a visual experience – line, edge, field, placement, direction, extent, colour, shape – from the visual images we receive them from; so that they can become personal and permanent tools, wieldable to make new images.

Picasso found himself in this position in his Blue and Rose periods. Those paintings are all built on observed poses, and are dependent on them for their composition. Who knows; the whole self-imposed self-mortification of the observation-and-record process, the curriculum of Cubism he designed for himself, may have sprung out of frustration with the stillness and predictability that process ordains. In any case when he emerges from Cubism and tests himself with figurative drawing again, his line is far more knowledgeable and far more independent than it had been before: this time he can place figures and gestures wherever he needs to, and can draw himself into the scenes, to make the observation of a model into a whole metaphoric narrative to search relationships of sex and power -  his Sculptor’s Studio and Minotauromachia drawings.

An entitled and decadent culture is this: it is quite possible in this country to do 6 years of art school and, for the hundreds of times you’ll be asked who you are looking at, or which school of painting you most associate with, never once be asked what it is you want to do, what change you want to effect, with your artwork. If we know in our hearts the answer to this question, and believe it is important enough to follow through, then the hard work begins. We then have to find out how art functions; then how our own art can function; then what we must do to achieve that function. It’s worth the hard work: without it we are providing just another pat on the head for a cowed, confused and anaesthetized generation. With it we are Bob Mueller piecing together plays with delicate balance and timing, setting the triggers and timers, placing seeds of doubt, arrows to fire escapes, final entrapments. And our art is a mission to save the world.