Dan Schein: Paintings of Horses and Other Things Also at Marvin Gardens. A review by Warwick McLeod 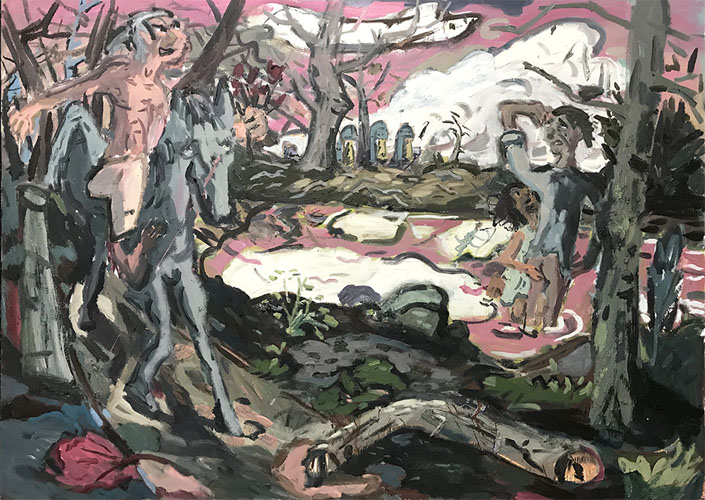 For the tradition of equestrian sculpture and in painting, the horse has symbolized the nobility of emotions: bridled, restless, focused, magnanimous; a straining passionate heart communing with the hopes of the human mind. Dan Schein’s bony old nags attend this party only to poke fun at the guests. In some paintings they take eye-rolling private fun to provide a rickety platform for their riders’ posturing folly: in others they wonder where this is all going to end. One of them escorts a simian human, protesting, directly to his fate. Another cocks his hindleg, dog-like, to pee on a rose cast to the ground; mocking his rider’s fury at the sight of a rival receiving sexual attention from, perhaps, the intended.  Or another viewer will as likely see here a man ankle-deep in his own lake of piss, while his female attendant kneels to pick shit from his ass and eat it. Both interpretations will do, and the tone of the painting suggests they can co-exist. The sense of humor is a gentle but ubiquitous schadenfreude for the poses people take up in their displaced, misplaced lives.

It makes you conscious of the contribution the viewer’s own story will make to the creation of any image; and the way these paintings are made keeps that a mental negotiation. The narrative is not the end-game of the painting. They’re like someone has shaken out the studio-trash (encrustations of paint, dirt, and at least one buried paintbrush) onto the canvas, for the painter, interpreting the detritus of living, to shift into momentary, temporary organization with coordinated, but not definitive, maneuvers of shoves and swipes. The viewer alongside is to grope, scramble and crawl too. But to try to disentangle the image from the structure, as if to crawl through the trees to get to the glades, is to play a game of pick-up-sticks. The entirety of the painting is all brushwork: its rules unique to the time and physics of its making; intricate, interdependent, total. One painting is near-Auerbachian in its virtuosity: the image, a howl out of the corner of a face, is held somehow in a dozen brush-lashes fighting for their time and place through older paint so thick and heavy as to have dried right on the brink of collapsing to the floor. This is high-wire acrobatics, a gamble of high stakes; a painting which haunts you long after you have left the room, because you sense it managed to catch hold of fleeing fate: and in doing so has made a real connection with truth; for such is life, as Ned Kelly said to the noose.

On a technical level these paintings can only hold themselves together because their painter has such a strong handle on the center of the color wheel - greys are organized and modulated to either side of a complementary pair like the piano-keys of a chord - and a scholar’s knowledge of the rulebook of composition: the compositional structure, though put down on large-scale canvases gesturally, never diverts into the short-cuts of the arm’s convenience, never falls away into neglected fat or fuzz.

For the way they are made Frank Auerbach is a clear influence; Leon Kossof too, both for the similar philosophy of execution, and in that the images are cartoon-like, made not from observation but from recollection and invention. In achieving a location as mythic, their individuals and simple relationships playing roles in archetypal landscapes, all made with a bare number of calligraphic-symbolic brush-swipes, these paintings remind you of Ken Kiff, another London painter of that time and circle – although these scorched landscapes are scenes from after, not before, the sundering of human from grace. Perhaps because of the despoliation of the landscapes, even more than these London painters I think of two Australian painters, Sidney Nolan and Arthur Boyd. Very few in America have ever heard of them, but Nolan is one of the best and most original of 20th century painters. His paintings combine, in a unique way, a freshness in desolation, and the small privacy of personal lives conducted under fatal skies: and these paintings of Dan Schein somehow play a similar chord.

Perhaps it is the light. I know about this painter nothing, other than that he lived his youngest 10 years in South Africa; but that is enough to have me suppose the back of his mind still shines in the light of the Veldt’s big sky. Maybe it also still echoes with the howls of that land’s brutality; which in the late 1980s and early 1990s would have been naked to any child, regardless of whatever social station. Whatever the source may be, there has been some personal spine-stiffening and mind-sharpening gone on, deeper than the normal experience, to account for the commitment to grapple the difficult; to hard work; and to rigor of self-critique, these paintings attest.

The exhibition Dan Schein: Paintings of Horses and Other Things Also was hosted by Marvin Gardens November 2nd - December 2nd 2018