Recent Paintings by Bastian Börsig: an essay by Warwick McLeod 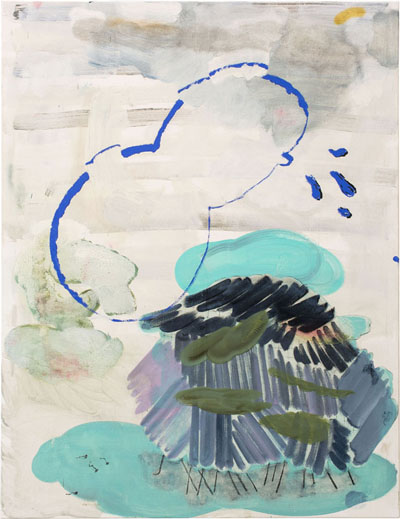 Each of Bastian Börsig's paintings is like a dialog between Narcissus and Goldmund: the young man and the adolescent boy of Herman Hesse's book; who, as teacher and pupil at a monastic school, form the deepest of soulmate-bonds. Narcissus stays on at the monastery, taking his vows as a monk, committing to a life of detachment and seclusion in daily observance through chanted prayer, contemplating the world as it has been formed; whereas Goldmund leaves, to wander the world, taste its adventures, living for the senses, taken up in the present. Those two choices can never be reconciled in one life. In having to make the choice, an aching, impassable gulf opens between them. Through the length of their lives, each is always in the other's thoughts: and each suspects, in his heart, that it is the other who has chosen the truer journey. The Sein und Zeit of Bastian Börsig's paintings balance these states, precisely and precariously, as if in a magnetic field.

The present state is a time/place held in the painter's intense concentration; within it, the marks make their track. A brushstroke ventures out, feeling the freedom of space, before sensing the proximity of the canvas edge, and has to reshape, curve back around; just as a rock-climber will understand bodily, in real time, how delicate and crucial is the distance between his arm's reach and the fulcrum he hangs from, how gravity is going to shift center as he extends his reach. This present is an 'athlete's zone', where boundaries between self and time and place dissolve; where action is not just a means towards result, but a world in, of, and for, itself.

To achieve this athlete's zone, you have to come to the canvas trained: know your tools and how to choose them; know your stuff - the rules of composition, the relationship of colors. And you have to come fit: bring a clear mind; and a heart that can leave its burdens at the studio door.

The other state is the world as it already is; unchangeable, formed facts, secluded from action and consequence, immune to the present's change. This world is held in the painter's memory as a bank of images. In order to store them, the mind has gestaltified the eye's information: has flattened images into freeze-frames, hardened their edges, set them in perspective views. But they are not just held by, reposited in, the mind; they dictate obligations for that mind. Any recognizable 2D image has an aspect – a direction you're looking at it from. As an aspect's edges harden in memory, its shape requires that the designated viewing position must also harden and set. So when they symbolize things in our daily lives, they also imply those unmoving, flat obligations, that require us to stay in a fixed position, be certain people, fulfill certain roles.

This flattening of image has a history in art: the making of icon. The icon tells a kind of non-negotiable fact, about the bare bones of its culture. Pictographic and ideographic scripts, such as Chinese characters, tell a story of their culture's most fundamental agreements on fact. Then there are the cartooning traditions, each with its cultural story: Japanese anime, with its blend of hallucination, sadism and lightness; the American tradition of Hanna-Barbera, of Disney, with its impishness, its perpetual optimism; and so on. Certain artists have questioned what a culture's mental process is, which converts a fluid present life, full of various potential, into simple non-negotiable fact. Andy Warhol's flattening of memory, through repetition and registration, tells a story of the banalification of life, through the attention-span of a transient consumer culture. Gerhard Richter's Baader-Meinhof pictures - likenable to Warhol's electric chairs and car-wrecks - are weightier and darker because they connect with an older European strain of considered violence, cruelty.

Bastian Börsig's paintings are a kind of chemistry lab, where the elements of potential-becoming-fact, mind and action, feeling and memory, are brought into proximity: to test their susceptibility to converge, to create formations; or repel, to retreat to separate realms. A mark, dragged through time, becomes line; line suggests edge, edge suggests shape, which attracts memory of time past. To conduct this experiment in clarity, without bias or prejudice, the brush has to stay in real-time, in the present; always on the very tip of line, as it twists and turns through fields, which themselves constantly shift between degrees of simultaneous space and surface, potential and fact. The linkage of cause and effect is studied; and because, to stay in the present, line is led by feeling, this becomes an emotional journey, through layers of tragi-comedy. For a parent, a baby's tears are a fact of life; a daily observance; but also a critical real-time test of cause and effect, a path along the primordial edge between happiness and unhappiness; acted out in, attracting and repelling, larger fields of responsibility, guilt, satisfaction. Even as the brush tries to contemplate and question this brink, line is becoming edge, then shape, then memory; and the blue paint sinks it beyond reach.

Because Painting's uncompromising rules, of truth-seeking and truth-testing, make themselves known slowly, stealthily, in and through the paint, Painting is a difficult language to learn, and it changes extremely slowly. It changes only as required to do so by the relentless interrogation of hard-questioning artists over a long period of time. The conduct of the Painting Tradition, from master to student, is a very conservative thing. One's art training is deeply formative, irreversible; and is formed by vectors of social history so large as to be, most often, invisible to both student and teacher - they are a Cultural Tradition. The most decisive point in an artist's career is the realization one is in the grip of such a tradition; that is to say, a lineage of interrogation. Understanding and accepting that, then finding one's role of effectiveness within it, requires discerning how the fates of time and place made the person you grew up to be; and how they themselves are slow-morphing through history.

One such lineage of interrogation, that goes back centuries, is the German Painting tradition. This tradition bifurcated into two streams with Germany's division at the end of the second world war. Each stream became somewhat colonized - by Russian occupiers in the east, and American occupiers in the west - but for each, Germany's systems of hochschule and apprenticeship, a commitment to education made bedrock in the previous century, remained in place for young art students of both societies.

In the east, Stalinist anti-modernism saw art schools revert to the nineteenth-century atelier model. Students from east European art schools graduated with strong graphic and drawing skills, practiced in figurative painting. After German re-unification the influence of this curriculum endured. It created the exotic appeal of the 'Leipzig school', and of other East European artists, for America of the 1990s and 2000s, where basic skills of draftsmanship had been lost from art school curricula.

In the west of Germany, the colonizing influence was American art, especially Abstract Expressionism and Pop Art. These were ripe for interpretation in Germany, because their antecedents were prewar German Abstraction, Expressionism, and Dada. Painters like Gerhard Richter, Sigmar Polke, Jörg Immendorf, and Marcus Lupertz re-attached them to the longer tradition, to re-search the German condition. In the 1960s these were among artists forming an influential center around the hochschule in Dusseldorf (Joseph Beuys was for a time Director here); whose graduates went on to be influential teachers at other West German art schools, as, for instance, Sigmar Polke taught Martin Kippenberger. You can see this ancestry in Bastian Börsig's paintings.

For the long German Painting tradition, Germany's geography - to the south, civilization and luxury; to the north, harshness and bitterness;  to the east, the void of the Eurasian Plain – bequeathed a certain task: to study the gulf between our daily, dutiful, artisanal path to betterment; and the raw, primitive, rootless condition of the human being. Everybody - spouse, children, family, fellow citizens - walks their life with these two versions of the human person inside themselves. To all these people, an artist bears some obligation: a serious painter is always in some way working for them; to somehow tell their story, ask their questions, wave their flag. But that task is very difficult, and, necessarily, a very wide-faring, solitary journey. When you finally get to that place, you're dangling from ropes and pitons, looking upside-down across a valley filled with sunset, to view the symbols you know as theirs, and as home; the table, the chair, the cupboard, the far-off outline of the monastery. And this journey holds them forever out of reach.