Recent Paintings by Daniel Sparkes: an essay by Warwick McLeod 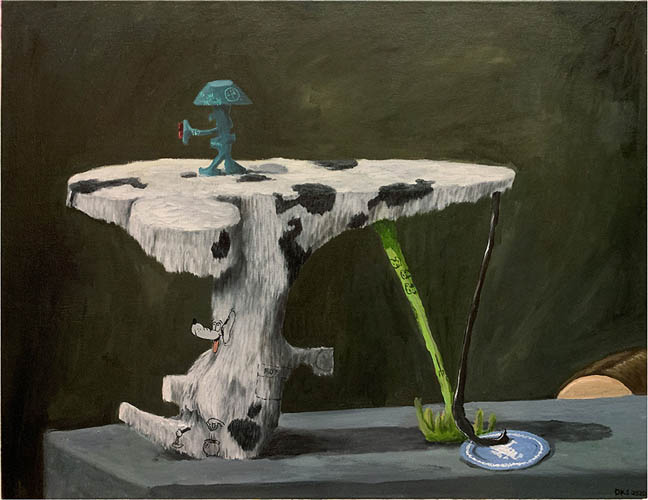 I used to have a job which gave me the chance to spend 40 minutes of every day in the Metropolitan Museum. I would pick a room each lunch-hour. I had that job for years; and by the end I could have described for you most of what was in every room. Most time I spent in the Egyptian wing. I grew to think the Egyptians could teach me better than any other culture. They wanted to teach me. Everything about their art was an attempt to explain. They saw and explained things that were very small, things that were very big, the diversity of everything, their connectedness, the unity of their whole. They had figured out a system that could analyse it, and continued to serve perfectly to explain it, even as their understandings changed and developed through different technological ages.

The beauty of it was, you didn't need to be inducted into any mysteries in order to learn. You could just take everything literally, and that would take you to meaning. A person with a scarab beetle for a head? Ok, that must be a human with the qualities of a scarab beetle. What does a scarab beetle do? Pushes its eggs in front of it, wrapped in dung. Therefore to be human must be to make a path rotating life from death…etc.

It was an education in the mechanics of meaning-making, of life becoming image becoming meaning. A lifelike statue would be flanked by the same image flattened to relief-sculpture, acting in a narrative scene. A yet-more-stylised version of that relief-sculpture image would crop up again in the hieroglypic text, explaining the narrative. In such a systematic way, you were taken through levels of stylisation between real life and abstract language, literally creating a cartoon character. And when the Egyptians needed to diversify meaning, they simply combined animals. A ram with vulture's wings, a hawk with cow's horns; that part-crocodile-part-lion-part-hippo, that eats your soul if found wanting when weighed in the balance: these were cartoon composites of cartoon characters.

Applying this approach to a Daniel Sparkes painting gets you quite some way along. The characters he inherits are from various sources. From Disney; from The Smurfs. From Philip Guston's Poor Richard series we have Dick-for-Nose Scrotum-Jowls; featuring as 3D, flattened, and hieroglyphic versions. In one painting, this character is flattened to profile, to make himself into an ironing board: propping it up is another, three-dimensional manifestation of the same, its angles somewhat straightened to create a third incarnation, Iron-Rod Anvil-Balls. Goofy's head slots in, to provide this character with a mind; actually a penis-for-a-mind, given how completely the shape of his nose reads in this context. Goofy pants with anticipation to sense the imminent tipping over the edge of yet another version of this character, which is groping its way across the surface of the ironing board, like a blind man waving his stick in front of him.

Penises watching penises holding penises getting off. This sex is not intercourse, but a magical masturbatory mystery tour. If there is a sexual partner, she takes little part in the trip, beyond leaving a scent (a flower; line-drawn lips; lipstick-drawn labia). She's a presence, but rendered tinyly remote, as if viewed through the wrong end of a telescope. Philip Guston's Musa occasionally appears from under the table; supposedly to represent femalekind. She lurks like a parking warden waiting her chance to issue a ticket and a tut-tutting for unacceptable behaviour: the top of her head bobs into view, right on the brink. "Killjoy is here".

Except that in one of them a tabletop pencil has bandaged itself to her brow, as if to read her thoughts; this discovery initiating a debate up and down the length of its shaft, recorded in varying states between flaccidity and perked interest; the latter winning the day, bending back, in Peyronian contortion, to take a closer look at its hidden object of desire. This interest piques, from a disconnected proximity, another version of that cock-and-balls character of self-forming accrescence; he drags himself across the table like a two-legged myopic cat (its gesture is such a perfect feline combination of curiosity and caution), with balls heavy as an anvil, one of his limbs extending as a crutch/phallus/arm, to carefully lever his weight towards the edge of the table, and take a tentative peek; see if there might be some vicarious, prurient enjoyment to be had from the developing situation.

If you were to pick a writer, instead of a painter, to describe this trip, it would be Henry Miller: a description from the inside of the balls; shunting back and forth to consult the back of the brain; ducking down every subway-stair labyrinth, every back-alley detour on the way. If you have to guess - and you do – it's probably a good enough aim to guess that the vanitas of Daniel Sparkes' tabletop scenes is that of the male's sexual relationship with himself. This is a mapping of the terrain of male mental chemistry and sexual biophysics. The tabletop, the wall, are the planes of insensitivity and incomprehension that separate a male consciousness from his world; the plane of disconnection any male will understand, and some males will recognise as an addiction: the needed, hated barrier to any real connection with a sexual partner, or to the real world to which she belongs. Connection has to become objectified, and so be distanced. The male needs to disconnect to get hard; but then has to re-wrap the thought in skin, to imagine he might be able to feel it as connection.

In terms of the way these paintings are made, analogous would be the way John Lennon's psychedelic songs put themselves together; or, amongst cartooning antecedents, Monty Python's Terry Gilliam. They don't have to make logical sense. But they do have to make a deeper kind of sense, to be worth the viewer's time. And the viewer needs to relearn how to look at them. Art history has put us out of practice. Goya's Caprichos and Disparates were, to his own time, completely recognisable within the tradition of the very rational satirical print, a tradition which would depict human foibles in animal form. Later eyes noted only that they were 'the sleep of reason'. That did a disservice to the long tradition of art that makes allegorical characters and relationships out of assemblages of animate and inanimate things, thereby to comment on human nature. Perhaps because we became a modernising, romanticising society, taking as an article of faith that the individual makes him or herself from an internal carte blanche, we took to derogating allegories of the mental world as 'strange', 'disturbed', 'horrific', or other adjectives that meant you didn't need to look at them seriously. It's good to see the tradition now being resurrected, to give us tools to examine how we are made, how we make ourselves.

This article was first published by Arte Fuse in July 2021