The Ties That Bind: Warwick McLeod's Knot. An essay by Damian Skinner 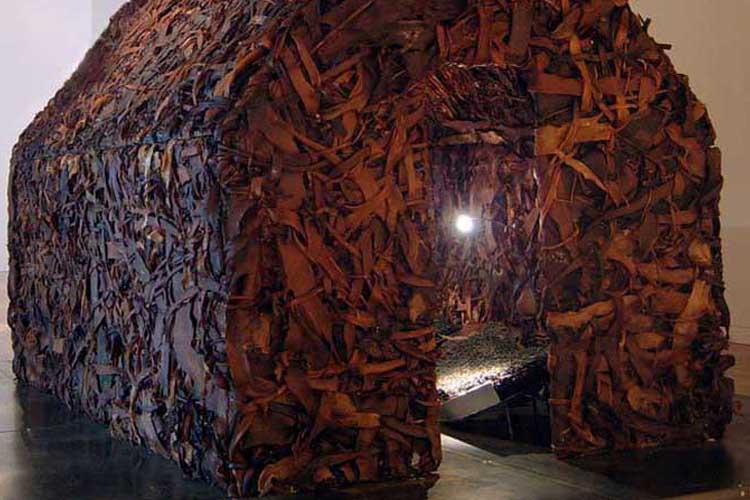 ‘Where was the seaweed broken off?’ The drifting seaweed stands here for a newly arrived stranger whose original home is queried.

In this dream I’m on a tightrope

And I’m tipping back and forth

Trying to keep my balance

And below me are all my relatives

And if I fall I’ll crush them.

This long thin line. This shout.

The only thing that binds me to the turning world below

And all the people and noise

And sounds and shouts.

This tightrope made of sound.

This long thin line made of my own blood.

Remember me is all I ask

And if remembered be a task forget me.

The first thing you notice is the smell, a sharp tang of salt and seaweed. It’s on the beach on a winter’s day, but without the freshness of spray. The smell is almost chemical, pungent, it probes your nose, underlying everything else. If you enter through the main entrance of the gallery, the kelp house is the first thing you encounter. Through the lattice of its walls, you glimpse points of light, and then as you move around it, a door, and seaweed books on metal stands, each illuminated with its own reading light. The pages of the books are carefully made with woven strands of seaweed, the intentional lines of warp and weft suggesting a code to be interpreted, unlike the rough cladding of the skin of the house. (One is pragmatic, the other artistic. The book pages are the labour of culture, performed on a winter’s night, within the shelter of the outer skin, the labour of craft.) The entire structure stands on bolted metal plates that shift and creak beneath your feet, stable as metal is, but not entirely certain.

The house, entitled Knot, is created from woven bull kelp, known by its scientific name of Durvillea Antarctica. McLeod gives the dimensions as 4 metres long and 2.4 metres wide, with a roof that reaches 3 metres at the gable. The door is 1.8 metres high, and 60 centimetres wide. Inside, the five books have pages woven from a black, ribbon-like seaweed called Cystophora Platylobium, with covers of bull kelp. While McLeod describes the house as ‘simple’, and likens it to a Hebridean cottage, the effects of the woven kelp are anything but ordinary. ‘The dried kelp is translucent’, writes McLeod, ‘letting through different kinds of amber light, so that being inside is like standing in a chapel of stained glass; at the same time it is like being inside a dried and preserved body, since the kelp also has the sense of leathered skin’.

The kelp’s characteristics play a crucial role in generating the effects of Knot, partly through their physical nature, and partly in their metaphorical possibilities, As McLeod suggests, ‘Seaweed is a fluid medium and will take the shape of what it surrounds.’ Which leads to the self-acknowledged conclusion that ‘To take a material of the nature of seaweed and force it into principles of rigidity, structure and shelter, is a story of dogged, unswerving perversity and dumb obstinacy.’ Or, to put it more succinctly, ‘It is an absurd idea to make a house out of seaweed.’ But this leads closely into metaphor and analogy, for this physical process evokes a ‘neurotic, unresting thought of a nature sundered from its past, its place and its culture,’ and ‘ a memory so cherished it has gripped the mind from within and bent it to its shape’. The body is evoked twice: the house as skin; and the pages within as genetic code books, at once ‘identical, black and inscrutable’ and yet ‘quite individual from close up because each thread of seaweed has passed through a journey of intense concentration under and over someone’s hands through different paths of time.’