The Ties That Bind: Warwick McLeod's Be Ye As A Brazen Wall. An essay by Damian Skinner 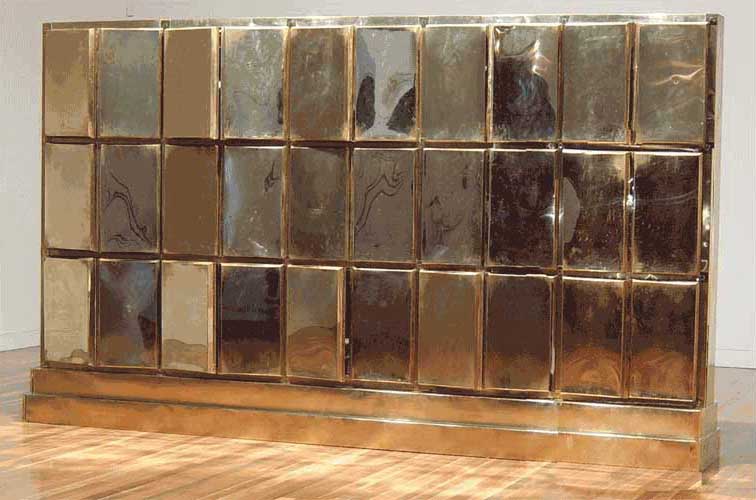 The first impression is the crystalline shards of light that reflect onto the wooden floor of the gallery, and then the panels that make up the metal wall. After a while, patterns of fingerprints on the metal surfaces in the corner of each panel indicate that these are cupboards, doors which open. The contents –strange cast landscapes that look like hewn rock, each with a revolving clothesline that moves in time to fragments of music. The effect is eerie. The doors are wired, they pull against your movement to open them. The wall is like a mausoleum. Should you even be doing this? Fingerprints are a strange and unreliable guide in the museum environment where ‘Don’t touch’ is a common command. In some of the portals or landscapes, small figures emerge from doorways shaped by odd perspectives, to loop and return, like the figures on cuckoo clocks. Inside each set of doors are reliefs of body parts – a closed eye, fingers. A thumb, what might be part of an ear lobe. Along the bottom of the wall, each alcove contains a body, a figure, compressed – slumbering but not necessarily at peace. (The space is too small, too claustrophobic, to suggest the long-deserved rest of the grave, yet these figures suggest the tomb, the markers of graves.) Figures traverse the bodies of these ancestors in solemn processions. What is the significance of the clothesline? Airing dirty laundry? The bodies? Skeletons in the closet?

Be Ye As A Brazen Wall is made of brass. It is 4 metres wide. 2.4 metres high, and 20 centimetres deep. Projecting 2 centimetres from the surface, thirty tablets form doors to the fifteen alcoves that stud the wall. According to McLeod, the wall is structured according to two basic patterns. The ‘cabinets are in five columns of three, and represent five people enclosed in a wall; each person is only present in their head, hands, and feet.’ Alongside this vertical orientation, the wall is structured horiziontally. ‘The top row of cabinets each has a house seen from some distance, with a washing line in the back lawn.’ In the middle row of cabinets, the perspective changes. ‘Here the view is from close to the house, looking through the window of the bedroom.’ Through the bedroom door, and then the back door, you can see the back lawn and the washing line. Finally. ‘In the bottom row the view is from inside the bedroom. An old person is lying in bed holding a model house on a hill. Outside the bedroom window we can see another washing line.’

The title Be Ye As A Brazen Wall is a motto of the McLeods. This family reference is supported by the piper’s lament to one of the McLeod chiefs that plays on the music boxes every time the cabinet doors are opened and the mechanism is activated.

We descended perhaps a dozen steps and came into a corridor on whose sides there were some horizontal niches such as I was later to see in many catacombs. But now I was entering an ossarium for the first time, and I was very much afraid. The monks' bones had been collected there over the centuries, dug from the earth and piled in the niches with no attempt to recompose the forms of their bodies. Some niches had only tiny bones, others only skulls, neatly arranged in a kind of pyramid, so that one would not roll over another; and it was a truly terrifying sight, especially in the play of shadows the lamp created as we walked on. In one niche I saw only hands, many hands, now irrevocably interlaced in a tangle of dead fingers. I let out a cry in that place of the dead, for a moment sensing some presence above, a squeaking, a rapid movement in the dark.

Umberto Eco The Name of the Rose

The clothesline and house on display in Be Ye As A Brazen Wall  is ultimately revealed, in the bottom row of cabinets, to have its foundations on the literal body of the ancestor. The idea of the land as a figure is found in both Maaori and Paakeha cultural traditions. For Maaori the land is Papatuanuku, separated, in an act of destruction and creation by Tane, from Ranginui, the sky. Within Paakeha cultural traditions, the land is often formulated as a supine female, awaiting an act of (psychic) penetration or joining with the (usually male) spectator. McLeod's purpose in representing the land as a body is different, less about possession, or, at least, a different formulation of possession, since the territory McLeod describes is not a literal geography, but a psychological one. The ancestor is the territory of spoken and unspoken desires and commands, what McLeod calls a family's 'collective wish for being', created out of generations compressed in time like geological strata. The body of the ancestor underlies everything we do, and represents both nature and nurture, genetic codes and codes of behaviour given form in mottos and family sayings that travel down the generations.

This is no easy confrontation with the spoken and unspoken wishes of the past, some of which, like a surname, are visible, and some of which, unnamed or articulated, may act upon us without recognition. Ultimately, Be Ye As A Brazen Wall is a kind of mausoleum, in which generations (five figures standing, only partially constructed from heads, hands and feet; and five figures lying down, compressed in the bottom row of cabinets; groups of five figures who move mechanically in each cabinet) are entombed, laid, as the phrase goes, to rest. But they don't rest, and they are not out of sight. Again the bodies of the past seek to intrude on the present, their effects as much a kind of haunting as a statement of genetic and cultural possibilities.

Related:
Be Ye As A Brazen Wall