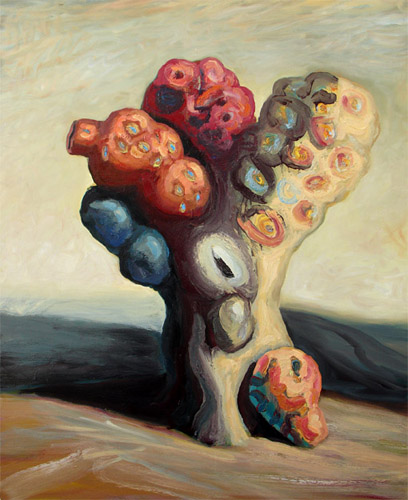 The term 'hypnogogic' was coined in the 19th century by the French psychologist L.F. Maury. Broadly speaking, hypnogogic cognition is characterized by heightened suggestibility, illogic and a fluid association of ideas. Hypnogogia is one of the most fascinating altered states of consciousness we can experience without the use of drugs. It is usually experienced on the threshold between wakefulness and sleep, where an object might appear as one thing, while simultaneously being experienced as something else altogether: or, as in synaesthesia, an object might be 'visualised' as a sound, for instance, or vice versa. In Selwyn Rodda's suite of lush paintings we are presented with a weird hypnogogic world, at once oddly familiar yet intensely alien. Biomorphic structures emerge from etiolated landscapes. Caught in mid-metamorphoses, these forms appear to be seething and pulsating within their fabulous skins. These are mind-forms, the product of an imagination given full-reign: objects redolent of the strange possibilities that this stream of consciousness approach has to offer. Rodda invites us to travel along what Jung called' the royal road to the unconscious'. It is a bitter-sweet journey.

Because none of the forms appear to have reached stasis, we are compelled to image what has immediately preceded, and what will immediately follow the view with which we are presented. Bathed in sickly-sweet, yet poisonous colours, these are crepuscular forms, which belong to a bizarre nether world. Neither wholly benign, nor totally malignant, they invite us to project our own meanings onto them: are they perhaps reminiscent of body parts, or wounds, or flora and/or fauna, or rock formations, or somehow impossibly all of these at once? These forms have called themselves into existence via the medium of the painter. Rodda has a wonderful understanding of paint and of colour. His fashioning of these forms is entirely at the service of their strange demands: whether crusty, slimy, wet or dry. They are probably as near as we can hope to get to a two-dimensional depiction of hypnogogic manifestations.