In the thick of it: Matthew Couper's 'Skins and Teeth'. An essay by Jenessa Kenway 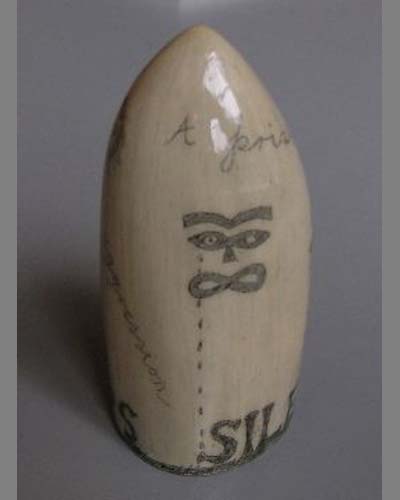 It's the first word that comes to mind scanning walls lined with canvasses laden with the dark, ornate symbology used by Matthew Couper. In a one-night-only exhibit last night, called Skins and Teeth, the artist claimed the Alios gallery space to display 14 un-stretched canvasses and engraved scrimshaw. And it was a thick experience. Thick like flipping through the pages of an encyclopedia or attending a lecture on existential philosophy. His works spaced only inches apart, with a couple canvasses on the floor, the experience was information overload, followed by compulsory photographs lest you miss some critical detail. And you will. Every time you return to a canvas, you discover a new detail, some cleverly tucked away icon, somehow overlooked on the first pass.

“It's always the same with Matthew,” remarks a guest snapping photos. “You have to dwell. You have to contemplate. There is so much theory.”

“I keep finding something new!” says another, returning to a painting for a third or fourth viewing.

The reason for the one-night-only, painting-packed expo: Couper wanted to treat the Las Vegas art community to a glimpse of his new series of paintings, all inspired by Las Vegas, before shipping them off to exhibits in New Zealand, Australia and Spain. It’s almost a tease, dangling the dense artistic morsels -- many already sold -- in front of Las Vegas art dealers and galleries before whisking them away.  Couper playing a little hard to get, perhaps?

And that’s how he likes his work to come across, too. Viewers must put forth some time and effort to understand each painting, and the reward is rich, anachronistic, Spanish Colonial-styled paintings, dripping with Baroque references to Salvador Dali, Andy Warhol and Francis Bacon, and riddled with a diverse cast of characters from Alf to Jesus Christ.

Each painting is laid out like paper currency, but rather than a presidential head in the center, a mixture of contemporary to antediluvian figures relay modern allegories many of which relate to Couper’s experiences as a recent transplant to Las Vegas. In “Monogramme,” we see the Stratosphere with top severed off, columns-turned-arteries spewing blood while an interweaving green snake turns the entire structure in a dollar sign. Nearby in “Amerika,” a figure representing government extends a hand holding a haloed black club from a deck of playing cards. Las Vegas is bleeding. The government gambling on the economy, or is it the economy of gambling? These dark subjects are depicted with the objectivity of an outsider, but there are no solutions, no excuses -- it's more of a recap of the current state of affairs. Mixed with the artist's experiences and survival struggles in both Las Vegas and New Zealand, the works function as elaborate journal entries.

Perhaps one key to understanding the exhibit lies in the row of scrimshaw teeth lining a shelf. Traditionally, sailors engraved drawings upon ivory harvested from marine mammals. Upon a polished-wood alternative, the artist carved intricate illustrations of skulls, dodos, saints, American eagles and more. The notion of the bloody harvest of whaling, traveling by ship and profiting from death and misfortune of a few, has that anti-capitalist colonialist ring that resonates in all of his works. In an inversion of colonial exploits, the content of Couper’s work is enriched by first-world struggles, issues and misfortunes. Do we like having our flaws showed to us? In Couper’s case, yes, we do.