I See Pictures and I Make Pictures! The Paintings of Bastian Boersig. An essay by Marc Wellmann 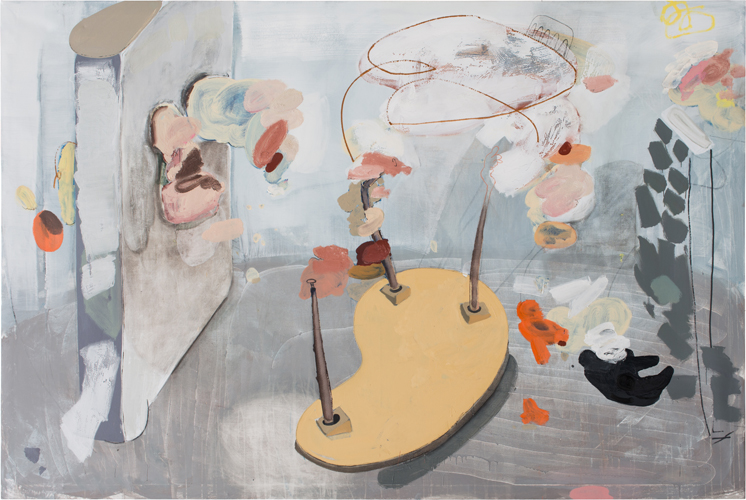 After more than a century of modernist eruptions have broken up the painting’s surface, it may seem tiresome to raise the question of its mimetic function — to scrutinize the medium with a view to its representational quality. At first glance, Bastian Börsig’s work would appear to discourage and indeed positively deny such an inquiry. Yet his pictures do not come out of nowhere. Their genesis is intertwined with a complex process that originates in reality, or its sensory reflection in the artist’s body.

Börsig speaks of “triggers” that prompt a picture: visual, or sometimes emotional, impressions that derive from his perception of reality. We can learn something about the transmutation of reality — the migration of pictures — by examining the vestigial figurative elements he offers to the beholder’s gaze as an initial anchor. On his canvases, which are always untitled, we can variously espy a sofa, a bucket, a box, a dresser with plates, or a red table with a drawer. But these objects, whittled down by abstraction to mere symbols, do not make any sense when read purely as what they are; all they do is limn the basic features of a space conceived in keeping with the principles of perspective, such as the relation between above and below, the existence of light and shadow, or intimations of alignment and depth. It is the apprehension of a solid object, comparable to what, in certain circumstances, one might “see” with closed eyes. These traces of perceived reality are largely domestic in origin, references to furniture or kitchen utensils, and their banal presence on the lowest level of the pictorial structure readily indicates that they are not its true purport.

According to a conceptual scheme developed by philosophers in the late seventeenth and early eighteenth centuries, we are incapable of cognition of things as they are in themselves; we only grasp their images as transmitted by our perceptual organs. Reality is a semblance created by our consciousness. That is the empiricist inversion of Plato’s theory of forms; his allegory of the cave described how reality presented itself to human consciousness as a shadow theater of truly substantive entities that eluded direct cognition. Plato’s ideas have absolute existence independent of man. John Locke’s and George Berkeley’s sensualism, by contrast, focuses on how the human mind, as the central agent of knowledge, contaminates reality. It marks the historic moment to which we can trace the emergence of a new conception of the picture, one that subsequently informed the modernist paradigm. It is not outward reality that matters; instead, an inner reality now crucially defines the relationship between the artist and his work.

What he sees, experiences, remembers serves Bastian Börsig as the loose scaffold for an encompassing dissimulation that only gradually manifests itself as he paints. His creative process is as open as possible and structured as a dialogue in which the artist’s relation to the painting’s surface unfolds. Börsig commands a wide repertoire of techniques, including the deft use of contrasts between areas covered with pastose layers of thick paint and others treated with diluted paint; traces of brushwork and paint runs and drips bear witness to the work’s facture. The powerful physical presence of the paint layers — the artist sometimes also rubs them on or scratches drying layers — is held at bay by sharply delineated edges of objects or ensembles of contours that sometimes recall cartoons, adding to the aura of lively good cheer his pictures exude. He likes to combine oil paint with charcoal or lacquers; a coat of the latter over layers of oil paint that dries more slowly produces a distinctive peeling or cracking of the surface. Used in moderation, such craquelure is a stylistic device that creates a semblance of abrasion or aging, in an effective contrast with the prevailing pictorial vocabulary of soft shapes often painted in pastel hues.

Unleashing the forces implicit in his various techniques and bringing them into a delicate balance in which divergent motivic strata and multiple coats of paint are interwoven and sometimes overlap to great effect, Börsig brings a virtuoso’s touch to his craft. His layers veil and filter the initial pictorial impulse, endowing the work with a life independent of the artist’s body. His is not a Surrealist technique that cedes authority over the painting to the subconscious and to chance: the operations immanent to the composition are too carefully calculated for maximum impact. Still, one senses a fundamentally speculative approach to reality, in the sense that Börsig’s painting unearths structures of things that have broken free of the conventional conceptual framework in which we apprehend our world.