Dystopian Vistas: The Art of Wang Zhibo. An essay by Luise Guest 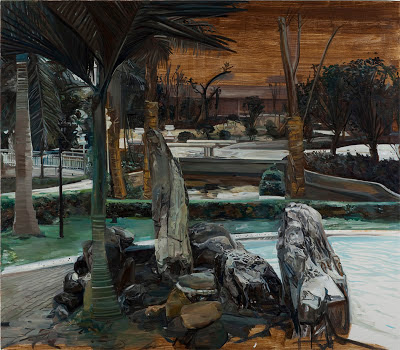 Graduating in 2008 from the China Academy of Art Oil Painting Department in Hangzhou, Wang Zhibo works in a highly academic style to represent a slightly disturbing vision of the landscape of modern China. Parks, fountains, trees and garden vistas - all are such distinctly traditional elements of Chinese literati painting. In these works, however, the trees and rocks possess an appearance of unreality, as if they are part of a landscape designed by a computer program for a property developer. Beautifully painted, with great control of her palette and her medium, she makes us see the world around us in different ways. Skies are murky, and the light so ambiguous that one cannot tell if it is day or night. Adding to the surreal ambience, these landscapes include palm trees, fences and balustrades, emphasising the sense of artificiality. This is a constructed world.

Her unpeopled vistas evoke the grandiose hotel lobbies and shopping mall interiors being built in Chinese cities - reminding me of the advertising hoarding for the 'Soluxe Winterless Hotel' that I saw from a Beijing taxi, on a bitterly cold grey-sky day in December. I had visions of that unseen hotel interior as a kind of Las Vegas wonderland. Wang's paintings perhaps even suggest the bizarre copies of European architecture which abound in China, simulacra of French chateaux, English thatched cottages or Tyrolean villages. Constructed with alarming speed by speculative developers they are often utterly deserted - ghost cities. In a similar way Wang Zhibo's  interior spaces, cool, detached and lacking affect, strike me as sinister places where awful things might be just about to happen.

Her exhibition is entitled 'Standing Wave' in reference to the still moment when two waves of equal but opposite forces meet. The awkward artificiality of the parks and interior spaces that she represents reveals a similar paradox. They are places designed for people to gather and meet, but they are empty, deserted, like de Chirico's Turin or Jeffrey Smart's Italian suburbs. The stillness has a dreadful quality of foreboding. Even the water in the fountains seems to have slowed to a stop.

There is no comfortable Chinoiserie here. Wang's paintings represent the landscape within which most of the world's city dwellers are forced to live - an international language of the built environment which replaces the idiosyncratic, messy and authentic with the fake, manicured and simulated. Her paintings make us face an uncomfortable truth.

Wang Zhibo features in her book ‘Half the Sky: Conversations with Women Artists in China’ (Piper Press, Sydney, 2016).