A Conversation With Selwyn Rodda 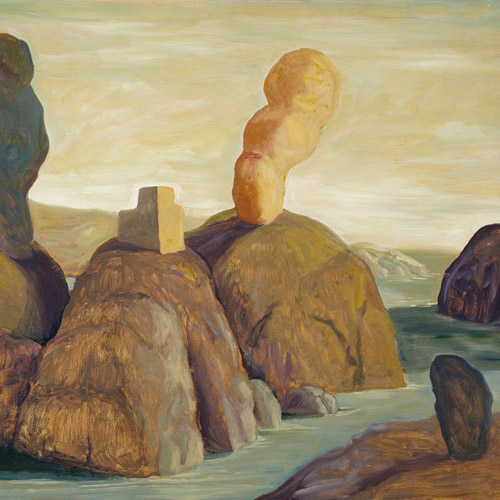 In medieval traditions of the narrative of St Anthony, and Daumier, George Grosz, and Otto Dix, decisions are made about how to draw the human figure (the kind of space they occupy, the kind of gesture the body makes) based on how the human is inside more than what they look like on the outside. When you draw how do you make your decisions?

My drawings and paintings arise and hopefully coalesce as I paint them, so the amount of planning is pretty minimal; a quick underdrawing to get things started. On the rare occasions when I start with a preliminary sketch, it usually unravels as I work and ends up a diversion as I regain my preferred improvisatory path in hope of chance encounters and happy accidents. And so I let one thing suggest another, and keep at it till the painting begins to push back, as an image or idea asserts itself, like a blur of possibilities coming into focus. Some come together quickly, while others are a battle with my own doubt and the shambolic mess I’ve made. And yes, the figurative elements, recognisable people, animals, hybrid beings, or the ‘biomorphic’ forms, are an attempt to articulate what it feels like “inside”, fugitive emotional, psychological and deeper spiritual states or conditions, rather than external anatomy. They are also a means of expressing a view I share with Daoism, that life emanates from one source and every living form is an expression of the same impulse: to stay alive. But also to simply be life, and yet with an understanding that the line between the organic, the animate and the inorganic and inanimate, is one that is never as clear as we like to think it is. In that sense I am less interested in individual psychology but rather in the more basic life forces that govern the higher mental and effective functions. For me this is emblematic of the ‘alchemy’, or perhaps ‘necromancy’, of painting: that paint seems one moment mere coloured stuff, and then suddenly it assumes vitality and seems invested with ‘presence'. Drawing decisions are made with minimal forethought (this is an owl, this a blob, or maybe a child), directly on the support, in an attempt to conjure and fix something vital and self-abiding, worrying at it till expressive and formal ‘feeling’ is achieved for the particular piece I’m working on.

I can’t remember ever engaging explicitly with any Australian theme, but I know my response to and familiarity with the local geography, light, colour, fauna and flora is something that is in the background, and one of the things I draw from. It’s “in the blood”. Sid Nolan was an artist who admirably synthesized many influences - Expressionist, Surrealist, Symbolist, ‘primitivist’ and the tradition of the sublime in European and British landscape painting alongside, as you suggest, early Renaissance art, with its simple, block-like geometry and haunting, fable-like qualities; which he also achieved in his best work. I think Nolan saw in Sienese painting of landscape certain colours - of course the siennas and ochres- and a clarity of light that were reminiscent of the Australian outback, though the similarities likely stop there. I think it was a perception that bolstered his desire to mythologize the Australian landscape – consciously or not, though prudently in any case, avoiding the appropriation of indigenous ‘myths’, of which he had only a superficial knowledge. I have had a similar, vivid realization of certain similarities in aspects of the Australian landscape and quattrocento painting and also share many of the same influences, though I do not work with any received narrative or mythopoeic content. Rather I paint things, objects, places, scenarios that I know absolutely nothing about. And so the urge is to render them as vividly as possible, because there is no ‘backstory’. I sometimes think the workings of my imagination are like glimpsing things in a thick fog and straining to ‘fill in the blanks’. For me painting is acting upon impulses, feelings, apprehensions, hints bodying forth things that are mind-flux; the imagination and the material obduracy and supreme malleability of oil paint supplying missing details, forms and textures in an attempt to fix them in an image.

Is it fair to ask, why the literal references to Giorgio de Chirico, to Italian painting of the landscape, the architecture/buildings/houses? Are you continuing some kind of direct dialogue with his work?

De Chirico is a touchstone of my imagination, as is his no less talented brother, Alberto Savinio. Creating theatrical, psychologically charged scenes is exciting and something I have been keen on since I began painting aged 14. On a conceptual and expressive level, however, I am drawn to de Chirico’s work because it suggests a potent way of picturing, without ever ‘lapsing’ into Expressionist excess or frenzy, how unsettled and unsettling human life has become in a time of alarming environmental and political crises. De Chirico spoke to protracted, residual fin-de-siècle anxieties over modernism, the collapse of “grand narratives” and historical continuities and the attendant urban maladies that Baudelaire and Nietzsche had described, decried or embraced in the previous generation. Yet in my view his pictorial language has lost none of its potential to convey anxiety, and its components form a visual ‘syntax’ that I feel is adaptable to our own, even more pressing anxieties.  I never quote him directly, but use similar devices such as dramatic backlighting that throws lengthy shadows and angular or lofty buildings vaguely reminiscent of early Italian architecture, though in my case buildings wholly unadorned and whose function remains unclear (as much as they might suggest churches or castles). Very much unlike de Chirico, however, I never reference classical or mythological themes. Yes, inescapable formal similarities remain, though I regard my own work as more akin to Kafka’s non-specific, dream-like spaces. I also foreground coal funnels stacks, or chimneys, for climate change is something that daily vexes my imagination, casting there a very long shadow indeed.

Up until recently, for various reasons, the word "narrative" was a kind of dirty word within contemporary art, deemed unintelligent and indulgent, lacking the complex visual language that contemporary art seems to be obsessed with. I know you work from your own imagination and meaning, which could be interpreted as a kind of personal storytelling, especially in your large scale drawings. How important is the narrative in your work? What is the narrative? And how much is fact or fiction?

When I work, the before and after of any action is wholly subsumed in mystery or a matter of conjecture – something made that building tilt and by the looks of it it’s about to fall, etc. Yes, I sometimes start with very loaded imagery, particularly in the drawings, but aside from the charge any image might deliver in itself, the overarching feeling I’m trying to convey is that confusion one experiences when chancing upon a scene and hasn’t the foggiest what’s going on. That moment before the mind resolves things, categorizes and orders things, when everything is up in the air. And in a more ambiguous way, I hope to paint things, beings, forms and spaces that are bereft of familiar human concerns. In that sense, I would like my paintings to be temporary harbours from complex human entanglements that we submit to out of fear, insecurity, uncertainty and desire. And paintings, like other art forms, are always revealing of their maker, however obliquely. I may want to purge my work of personal autobiographical elements, but that is not entirely possible. I can see that the things that preoccupy me can make their way into my work, but any narrative is unintended, and the beings I paint are presented, I hope, with an ambiguity that respects their autonomy and freedom from symbolic reduction. In an age of vulgar self-promotion, the anonymous, the innocently self-absorbed, are imaginatively and ethically attractive. I tend to paint things that have achieved a stasis, maybe the moment before the storm. My drawings and paintings are moments laced with the possibility of calamity. Most people, it seems to me, live on that knife’s edge, where to slip is to feel the fissures and fault lines.

Your brush work, in certain parts of the painting, seems to free up and really know the form it’s going around. In those instances, the painting seems to become something quite different and about something else altogether. Do you recognize it when this happens and what do you feel is happening?

Yes, when I know a form, its modelling happens rapidly and there is recognition that the painting has taken on its own dynamic, and there’s an attendant satisfaction when a form emerges wholesale out of nothing. But even then they are sometimes repainted several times as the rest of the painting evolves. And I have almost never been able to pull off a complete painting without revision, frustration and massive spikes of doubt. I need to change things because I do not work with a clearly defined composition in mind: everything is provisional till the last brushstroke. For me, a form works best when it is set against a simple background. Different parts of a painting correspond to different impulses, qualities of mind or emotional states. This is somewhat akin to rhythm in music or metre in poetry. I see my paintings as being part of an imaginative continuum. I paint lifeforms, and the world they inhabit.